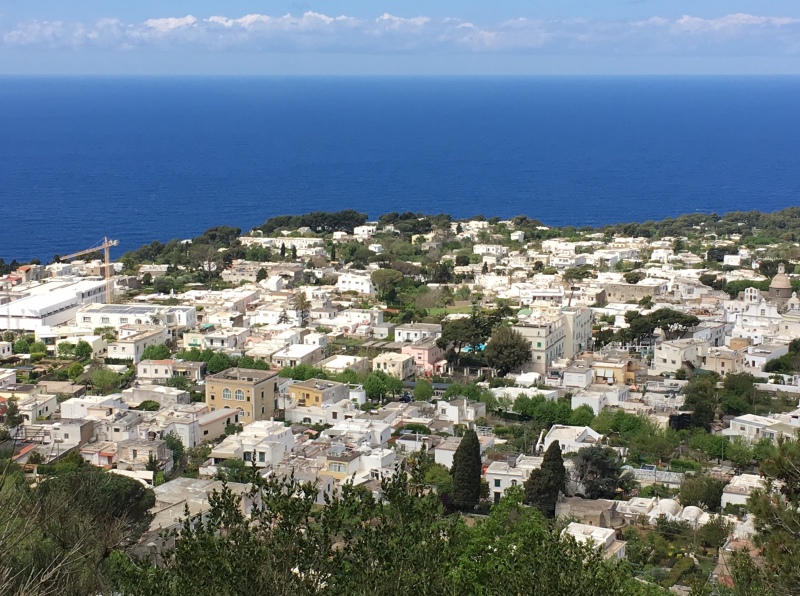 It’s going to be much better than all right

It is now, and probably always will be, a mystery to me that close to a major tourist attraction in Italy one can eat so well. Granted, that is not always the case.  (A hellhole in Cinque Terre comes to mind.) But here at Le Grottelle, the last restaurant on the road to the Arco Naturalle in Capri, we ate as well we have ever eaten in Italy.

We’re talking simple fare. Three days into our stay, and I still had not had a dish of spaghetti. On the menu at Le Grottelle I saw spaghetti sciue sciue. Simple put, spaghetti with local tomatoes (pendolini) sautéed fast in oil with a little garlic.  My wife ordered a fish of the day, which was pezzogna, oven cooked, deboned, served with a little olive oil and lemon.  Light, mild, delicious. “It’s a sweet fish,” our server said. “Delicate.” His father, he added, always said pezzogna needed to be treated gently once it was dead, to preserve its essence.  (When you are lucky, you catch a server who waxes poetic. He was such a one.) With lunch we split a assortment of fresh vegetables.  And a couple glasses of white wine.  This is what we come to Italy to eat, how we want to eat.

We finished with espresso. I had my first limoncello of the trip, right from the freezer.  A clean finish to an excellent lunch.

Talk about a tourist place. But wait. That and so much more.

We had just got off the seggiovia in Anacapri.  The lady at our hotel had recommended Barbarossa. And there is was, right below the lift, right next to the bus stop. At the top of the stairs, where we were greeted by an older gentleman, possibly the owner, we observed an older woman, possibly the owner’s mother, eating a piece of fish.  “That,” my wife said, pointing at the woman’s plate.  Yes, definitely that.

It was the fish of the day, a merluzzo fillet. My wife had it, I had it, along with a mix of vegetables of the day. Around us servers flew by, setting down assembly line salads in front of large tables of tourists deposited there by their fearless leaders.  Then came the dishes of pasta. All right, it was a production. But there was integrity here. You saw it in the servers and in the food. The merluzzo was very very good. In a pinch, Barbarossa would feed you well.

They are lined up out the door.  Always a good sign.  And these are locals waiting for a pizza.  Even better sign.

After three days of pretty aggressive eating, we were ready for something simple, uncomplicated.  Like a pizza. We came to the right place, although having walked by it 5-6 times it had become clear that Ristorante Materita would not disappoint.  And it did not. Always slightly painful customers, my wife and I order slightly off the menu: a modified margherita and a modified pizza bianca, covered with their vegetables.  Modifications? No problem. I am always impressed by the agility of Italian kitchens and servers.  Sure, we can do that. They make things the way you want them. Materita was no exception. I would definitely come back again.

If the bus driver likes it, it’s probably a good recommendation.

In Anacapri, il Solitario is right along the main drag, Via G. Orlandi. Actually, not quite along. From the main road you enter a long viny lane typical of this cool little town, at the end of which is a neat little trattoria. When our server handed us a menu, we asked, What’s fresh? You could see him brighten, like he was thinking, Have I got something good for you.  Tuna tartar, oven-roasted orata, grilled calamari and gamberoni, roasted potatoes with rosemary. After we ordered, he gave his head an inquisitive tilt.  And the tuna? Really, he said, it’s not to be missed.

Everything wonderful, from the crunchy fennel and wild arugula in the salad, to perfect potatoes, to the calamari grilled just right, mild orata, and yes, the tuna starter.  We had house wine.  We finished with the torta caprese.

Midway through our dinner, a group of a dozen or so youngish Italians arrived.  Locals. Always a good sign.

We’re in Anacapri two more nights.  We can eat somewhere else tonight, and risk being disappointed, or we can return to Il Solitario and be happy again.  It’s a no brainer.  We’re going back.