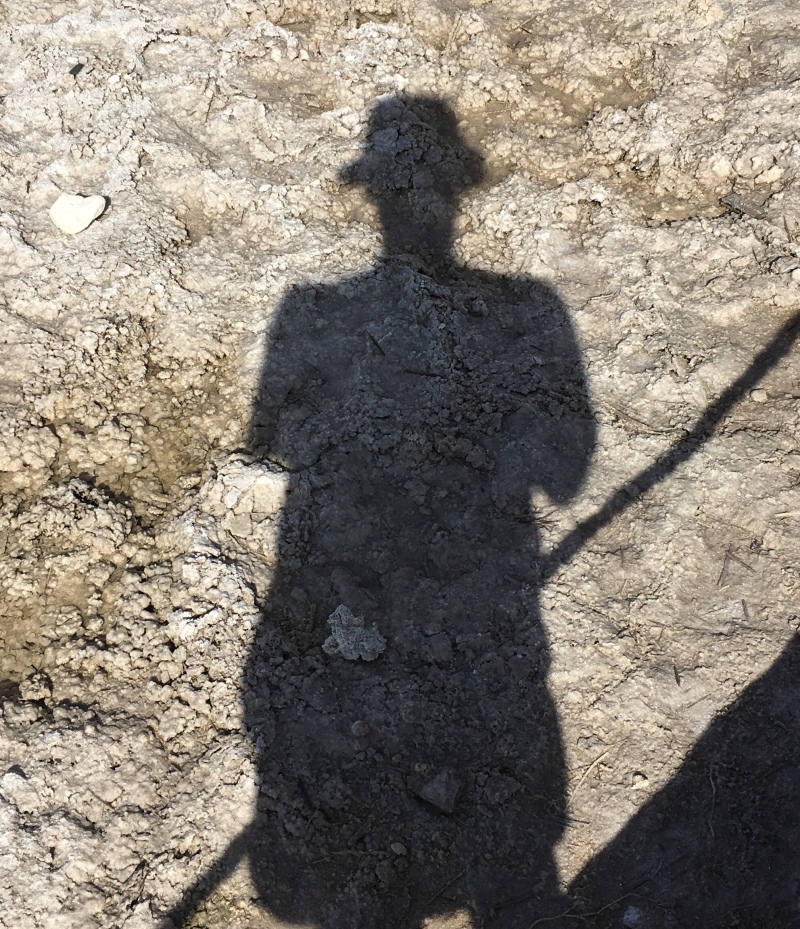 I’ve been having doubts about my hat. It’s a hiker’s hat, with a full brim all the way around, and a drawstring that hangs in front of my ears and can be cinched under my chin. I bought it sort of on the fly. It was a careless oh-what-the-hell purchase. I knew I would need a hat. In three weeks time we would be walking eight National parks.

Unlike my wife, who looks great in hats (and she will tell you so, and it is true), a hat on my head can look ridiculous. When I buy a hat, attention must be paid.

The problem is, this hat is blue. And it feels and looks permanent press. A hat with soul has to have some wrinkles. It should look like it’s taken some abuse. This hat is technologically improved, wrinkle-, water-, and soul-resistant.

One of my first impressions when we get on a trail is that everyone has a better hat than I do. After we hike a few trails in Canyonlands, I revise this impression. On a continuum, dorky hats on one end, cool hats on the other, mine definitely falls in the medium dork range. I think about remedies. One night, back at the hotel, I dunk my hat in a sink full of water and tie it up. Next morning, when I untie it, the hat pops back into is staypress shape.

It’s fatuous, I know, to be preoccupied with my hat in these places. To walk in these parks should be a spiritual experience. At the end of one day, at Arches, driving out of the park, I see a bearded man in red shorts and a t-shirt stand by the side of the road, looking. He is not taking a picture. He is just looking. You see this in the parks—the long gaze. I guarantee you, he is not thinking about his hat.

Late one afternoon, leaving Dead Horse Point Visitor’s Center, we’re heading for the Green River lookout. My wife has decided to introduce Luigi and Adele to Native American music. Luigi pulls a CD out of his pack. It’s called “Sacred Spirit: Chants and Dances of the Native Americans.” We listen to “How the West Was Lost,” “Winter Ceremony,” “The Counterclockwise Circle Dance,” “Celebrate Wild Rice,” “Brandishing the Tomahawk,” “Heal the Soul,” and “Intertribal Song the Stop the Rain.”

They’re good songs, with plenty of soulful potential, mostly played in the key of E.

E for electric. We hear drums, both real and synthetic; occasional voices, all sampled chants of Navajo, Pueblo, and Sioux tribes; and a lot of synthesized music. The music is soulful and techno. Mostly techno, the work of Claus Zundel (aka “The Brave”), Ralf Hamm, and Markus Staab, of a recently discovered new-age tribe in Germany. After an hour or so, we make an intertribal decision to stop the music.

That night I contemplate what to do. Run over my hat with the car. Dunk it in a mud puddle. Pile rocks on top of it. Punch its lights out. Standing in front of the bathroom mirror before bed, I put on the hat, tighten the chin string on top of the hat, pulling the side brims up, Aussie style. It’s a small but appreciable move in the right direction on the hiker hat continuum.

A few days later we hike along Taylor Creek in Kolob Canyon, in the northwest section of Zion. The hike follows the creek 2.5 miles. Along the way you cross the creek dozens of times, stepping on rocks down the bank into the stream, rock-hopping across the water and up the other bank. I can’t help but think of Japhy Ryder skipping down a mountain side in Kerouac’s The Dharma Bums, a book that made me want to hike and climb when I was in college.

The focus and concentration on movement, boot-feel, the sound of the stream and wind create a spiritual vibe, but the real spiritual whammy occurs when we get to the end of the trail.

At the end of the trail, the Double Arch Alcove is a great damp shady space that forms a huge natural amphitheater, one of those natural acoustical marvels. A group of Mormon girls are swishing about in their long dresses and sandals. Then they stop, form themselves into two rows, and begin to sing.

Zion is a busy place. The Taylor Creek trail is crowded this day, even in late April. Other hikers approaching the Alcove, hearing the singing, stop and lift their heads and fall silent. The sound is full and haunting and uplifting; it is pure heaven. The girls sing all four verses of “Our Mountain Home So Dear.” Here is the third verse:

In sylvan depth and shade,

In forest and in glade,

The hand of God we see

In leaf and bud and tree,

Or bird or humming bee,

Or blade of grass.

They stop singing, everyone applauds, and the girls go back to skipping along to the trail. And then they’re gone. We who heard them remain, standing in hushed silence. 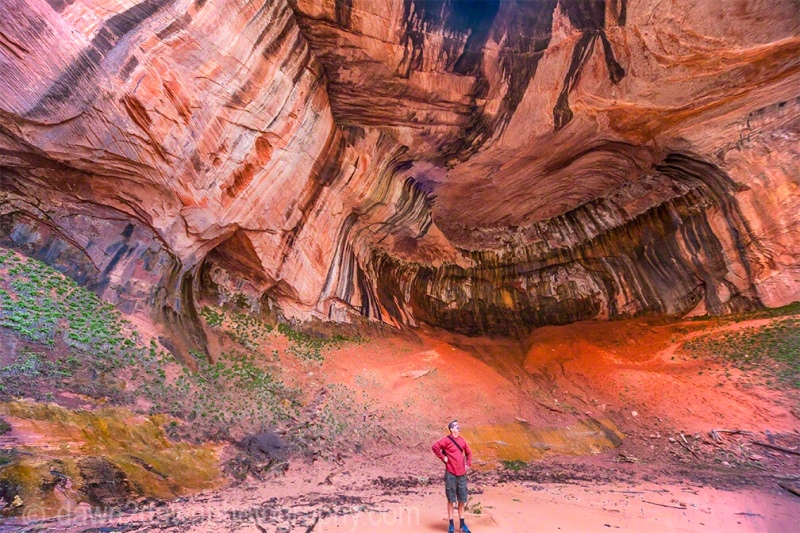 For a few days I contemplate different hats. I look at them in visitor centers and shops we walk into. I don’t want a hat with Bryce written on it, or Capitol Reef, or Moab. I want a non-denominational hat.

In the Zion trolley, next to the map indicating the nine stops and trails to access from each stop, I see this quotation: “Wilderness is not a luxury but a necessity of the human spirit, and as vital to our lives as water and good bread (Edward Abbey).

We get off the trolley at the ninth stop, to hike the Narrows. You walk ankle deep and knee deep in the Virgin River, using a staff to help keep your footing. The bottom is stony, the current a steady pull.

Every so often, you remember to stop and look up—up at the sheer cliffs that rise straight and high over your head, some of them several hundred feet. You struggle to maintain balance at these vertiginous moments. It’s wilderness. You’re cold and unsteady, but still you get kind of drunk in the moment. You marvel at the millions of years it took to create these cliffs and canyons.. Some people see God’s hand at work, others the long grinding and sluicing and slow pressure and lift of tectonic plates. 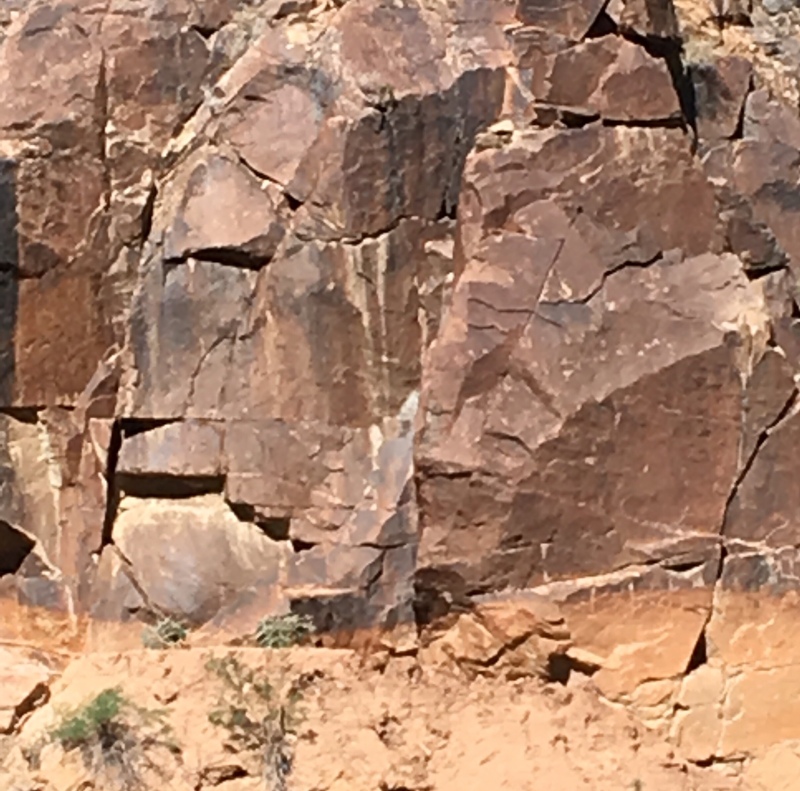 When we get to the Colorado River a few days later, I begin to see faces in the stone. Same cliffs, made millions of years ago, same science. I think of it, back there in the infinite past, as time before God. The faces in the rock come at me—cubist human figures sculpted in stone, mostly men, none of them smiling, none wearing hats.

“Do you see that one?” I ask my wife. I point to the top of the canyon on a cliff face half mile down river, tell her to follow the three stairs down, left to right, then look straight down.

“He looks Biblical,” I say.

“I see him,” the woman next to me says. She lifts her camera to take a picture. A few other people on the raft see what I see; others don’t look.

Around the next bend, I see Gonzo, the muppet. Then some Egyptian-looking figures. Then some faces of indigenous peoples.

The cliffs contain multitudes. We see what we want to see up there, what’s there and what’s not there.

I pull off my hat and put it back on. It’s not perfect, but I need it.