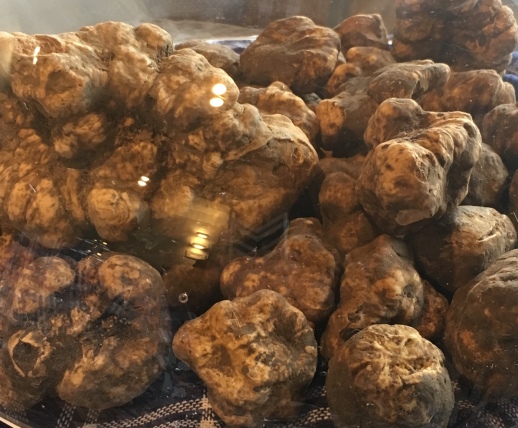 And I do mean truffle, the white ones and the black ones, those gnarly, earthy nuggets of delight, the ones you dream about, their shavings falling like heavenly snow flakes on your tagliatelle. Yes, those truffles.

When it’s November and we think truffles in Italy (called tartuffo), we think Piedmont. Let me here confess that I have not eaten truffle on anything anywhere in the Piedmont. I’m sure they are wonderful. One day I hope to have that experience. But, as I say, there are other truffle zones, two of them just a hour’s drive from San Marino, where we live over here. They are Sant’Agata in Feltria and Acqualagna. The latter of two is the river city in this post.

Yesterday we returned to the tiny town of Acqualagna in the Marches region, 40 minutes inland from the Adriatic.  If you set forth from Fano, within 25 minutes you are in the hills. In ten more minutes you are in high hills, with enthralling rocky outcroppings visible. Then, in the Passo del Furlo, you drive along the Metauro River, soon to arrive in Acqualagna (that is river wood), known for its tartuffo.

I am doubly lucky–at the very least. First, I married an Italian. Second, my wife has cousins over here who indulge in food adventures, including tartuffo.  Every year we are here, they say, “Let’s go. We found a new place in Acqualagna to try.”

(As we pass through the Passo del Furlo, Arnoldo the cousin leans over to inform me that Mussolini slept here, Right there, in that inn.)

So this year we pull into Ristorante Lampino, a nondescript joint just beyond the town, and it’s closed, due to a death in the family.

We drive back into town.  It just so happens that Marisa, Arnoldo’s wife, has recently seen a television program about the best eating in Italy, and first prize for this particular program went to Osteria Braceria, in Acqualagna. At the top of a stairway above a butcher shop, the restaurant is two small rooms (eight tables in one room, five in the other), with kitchen access via dumb waiter.

It’s a Monday. We’re here for lunch.  The place is packed. Our lucky day: a table for four is available. 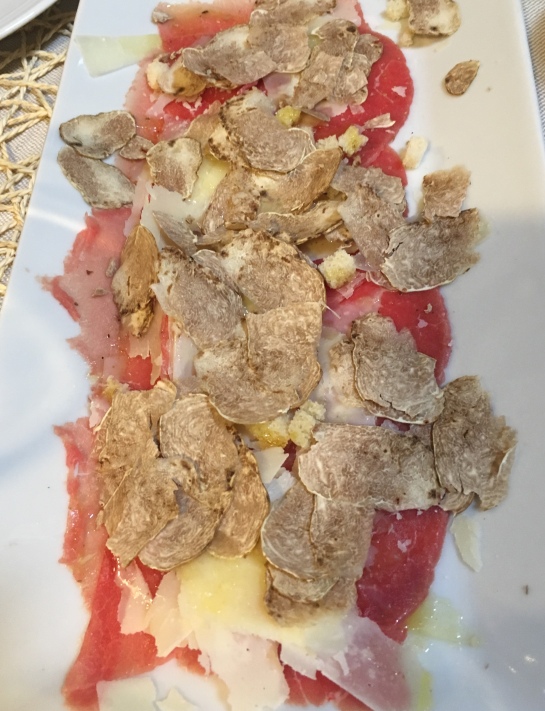 We start with a carpaccio and truffle, proceed to tagliatelle cooked in broth with shaved truffle and a dusting of Parmigiano, and come in for a landing with a tagliata (grilled beef steak sliced when it is rarely cooked), also graced with shaved truffle. 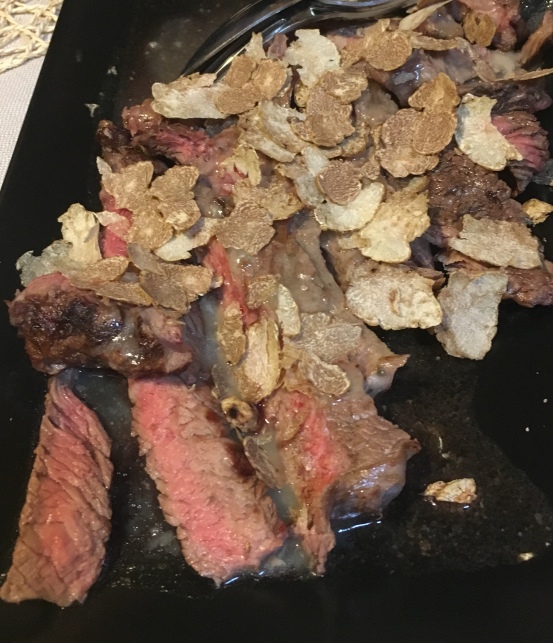 The cousins are not wine drinkers.  I am. The waiter pours a glass of Montepulciano (the one in the south, not the one in Tuscany), which is soft, full, and agreeable; then brings me a quarter liter of local Sangiovese, to which the above adjectives are equally applicable. Total cost of the wine, 5 euro.  Believe it. Total cost of this truffle lunch, 50 euro apiece. That’s very good value.

On the drive home we stop along the river in the Passo.  Another tartuffo experience. Acqualagna, I will visit you in my dreams. 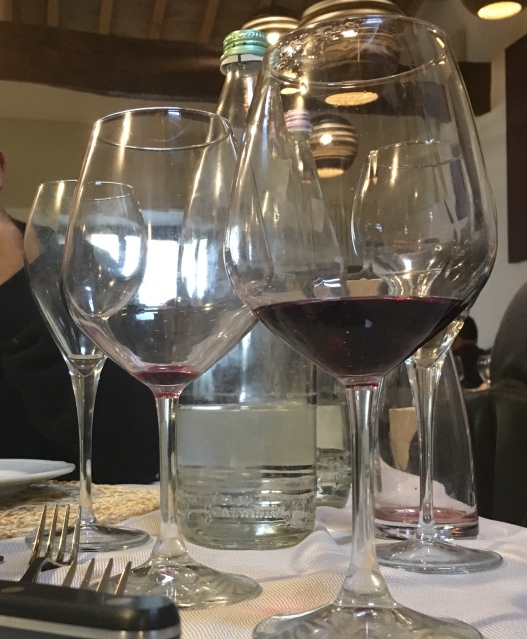