The coffee, he means, in the filter basket.

It’s a Saturday morning.  I’m making him an espresso in my Delonghi Dedica Deluxe Pump Stainless Steel Espresso Machine. When you make espresso with a machine, tamping is a thing. It’s part of the process, the ritual. I’ve always tamped. The pros in coffee bars tamp. Every machine I’ve owned came with a tamping tool. When I tell him with this machine I only gently tamp, just leveling the coffee off, he says I might get better crema leaving it loose.

I push the button, Dedica Deluxe does its stuff, and through untamped coffee runs a dense black stream. I get crema, gorgeous crema the color of tanned leather, with a few winking bubbles revealing perfect black espresso just beneath. I can’t say with certainty that I see a difference, that I see more, thicker, deeper, richer crema than with my usual gentle level tamp.  But his claim deserves to be tested.

I take a sip, tell him his hypothesis has merit.

When I was a kid and went to family reunions, once the food was set out, I always looked for my mother’s casserole, made with ground beef, noodles,  and cream of mushroom soup. There were other casseroles like hers on the long potluck table, along with scalloped potatoes and coleslaw, lots of chicken and sliced ham, jello salads with canned mixed fruit suspended in jello space, and the standard issue green bean casserole, made with a couple cans of green beans, a can of crispy onion mix sprinkled over the top, and probably, for a saucy base, a dollop or two of cream of mushroom soup. I vaguely knew these dishes and would survey them with skepticism. Ham? Okay. Green beans? A couple, for the crunchy onions. Someone else’s casserole?  Not a chance. My mother’s casserole was best.

Was I a casserole snob? No, I was a nine-year-old who knew what he liked and stuck with it. It’s what nine-year-olds do.

Frank Bruni, in a recent New York Times article, points out that the 50-and-older individual wants consistency and certitude.  The martini, the smoked chicken, the fillet of whitefish, your basic burger: you want fare that is predictable; same good every time.

So it is with coffee. People know what they like.

Along Telegraph Road, every two or three miles is a Starbucks. At every one of them, at 7:15 a.m., a line of cars queues up. Those drivers know what they want–a venti green tea frappucino with a strawberry smoothie base, two pumps of caramel, three espresso shots, and topped with whipped cream and a caramel drizzle. Or some such thing.

Starbucks teaches us that tastes evolve, unpredictably, voluptuously, along with, or perhaps because of, technology.

Coffee came to the West from the Mideast, through Venice.  In 1586 Gianfrancesco Morosini posted news of coffee from Constantinople. In 1683 the first coffee shop opened in Piazza San Marco. In pre-espresso Italy, coffee was made by defusion.  In the US frontier coffee was made by the same process–exposing ground coffee beans to heated water. Cowboy coffee: you took a handful of ground coffee, tossed it in a pan of water; held it over a fire, strained the liquid, and drank. (See Kevin Costner in “Dances with Wolves.”) 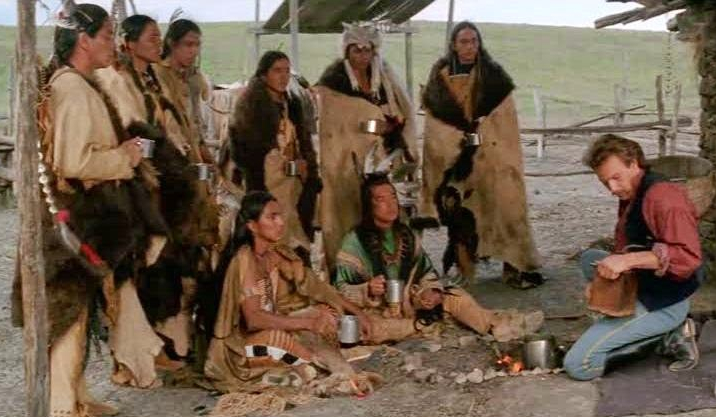 Names of note in coffee pot history: Sir Benjamin Thompson (aka Count Rumford), who sometime between 1810 and 1814 invented the percolator; James Nason of Franklin, Massachusetts, who patented the percolator in the US in 1865; and Hanson Goodrich, an Illinois farmer whose 1889 device combined the central stem with the perforated basket.

Serious Eats notes that because of the heat, “traditional percolation… tends toward creating bitter and overextracted coffee.”  That’s the coffee I knew as a kid, strong stuff that my parents percolated and that you tamed with cream or Half and Half or whole milk or a heaping teaspoon of Coffee Mate. Then, in the 1970’s, Joe Garagiola and Mr. Coffee and drip coffee makers provided a kinder, gentler form of extraction. And then other technologies appeared, some of them, like the French press and the moka, foreign in origin.  Today we have pucks and pods and pourovers and just about everywhere there’s espresso and cappuccino and macchiato and latte. 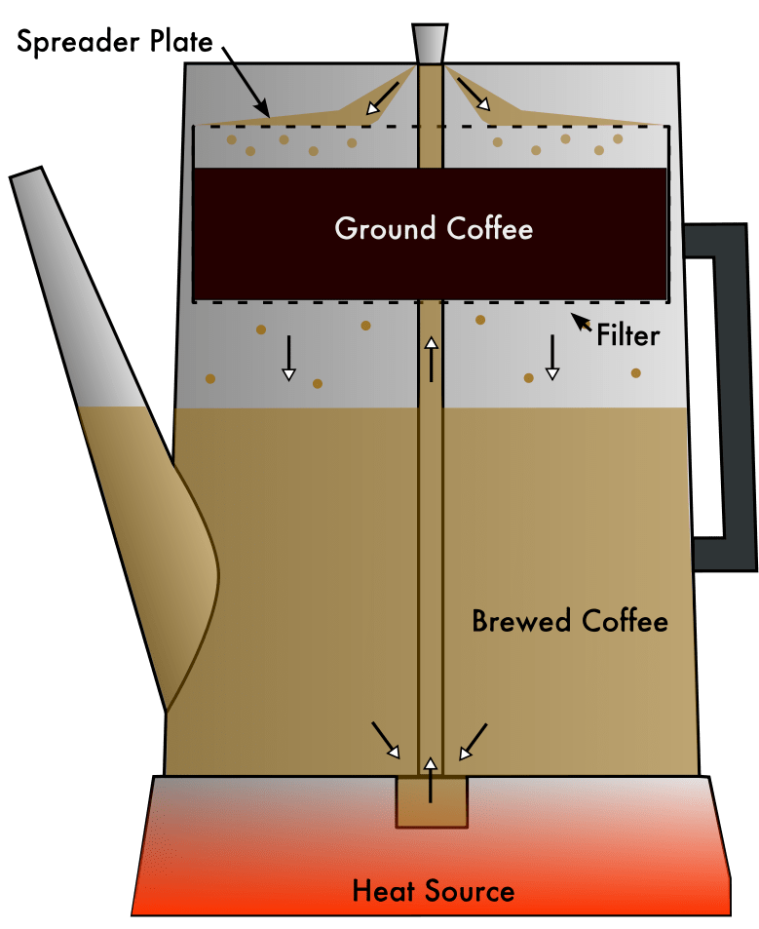 In my house we have three moka pots we rarely use.  In thirty some years, those pots have sat in a cupboard because I’ve also owned a half a dozen countertop espresso machines. I’ve had a Gaggia, a couple Brevilles, three Saeco Aromas, and now the Delonghi, all of them with single- and double-cup filter baskets and steam wands for frothing milk.

Whenever I replace a machine, I briefly flirt with the idea of getting one with a grinder. But only briefly. During my Gaggia period I ground my own coffee with a stove top grinder. It was noisy and messy, and the grinder tended to get jammed with a couple recalcitrant beans. Besides, an expresso-cappuccino plus grinder machine takes up a lot of counter space.  I tried various brands, eventually migrating from Medaglia d’Oro in a can to  Mauro brand, an imported pre-ground espresso coffee in a vacuum-packed brick. I stayed with that until the Gaggia was no longer worth fixing and transitioned to Lavazza Crema e Gusto, also in the pre-ground vacuum-packed brick, through two Brevilles, three Saecos, and into the current Delonghi regime.

Lavazza consistently gives me the taste I want. As with the casserole, for coffee consistency is a big deal.

In Italy, if we can, my wife and I go to a Pascucci bar. Pascucci is a brand the way Shell and Mobil and Sunoco are brands. You recognize the logo. You expect—and get—a certain taste. At any Pascucci purveyor the coffee tastes deliciously the same every time.

Which is a bone one might pick with local espresso-cappuccino establishments here in the US. You know you’re going to get strong coffee. Probably bitter, too.  Whereas Pascucci uses its trademark blend all the time (the next time we’re in italy and go to the new Pascucci bar in Rimini, a place that looks a lot like a Starbucks, the coffee will be predictably, transcendently the same), in US espresso bars the bean sources change. At Astro, in Detroit, for example, you’ll drink coffee from Peru, from three sources in Columbia (Tinama, Salado, Pitalito), and from Ethiopia and Burundi.  The coffee experience is a journey.  Espresso and cappuccino consumption, I get the idea, is a young person’s sport, and by young I mean between nine and fifty-and-older. Change is good.  Coffee is an adventure.

“Don’t get cappuccino,” I tell my wife.

Wherever we are, if not at home, if not in Italy, I rarely get espresso or cappuccino.  It will probably be a disappointment.

It not that it’s not good coffee.  To many consumers, it is very good. It’s just not the good we’re used to.

There have been emergencies, times when I’ve really needed a boost and had to order a Starbucks espresso. Ignoring the paper cup (with some difficulty), I find that a double shot of espresso with one packet of cane sugar at Starbucks gets close to the flavor I’m looking for.  Crema? Yes. Hot enough? Definitely, yes. Bitter, yes. Still, I slam it and toss the cup and resume my life. Would I ever order a cappuccino at Starbucks? Never, anymore than I would order a Trenta, no-foam, five-shot, half-caff, no-foam pumpkin spice latte, with no foam at 210 degrees.

In this and other ways, I am still a nine-year-old looking for his mother’s casserole, because that’s the one I know I like.