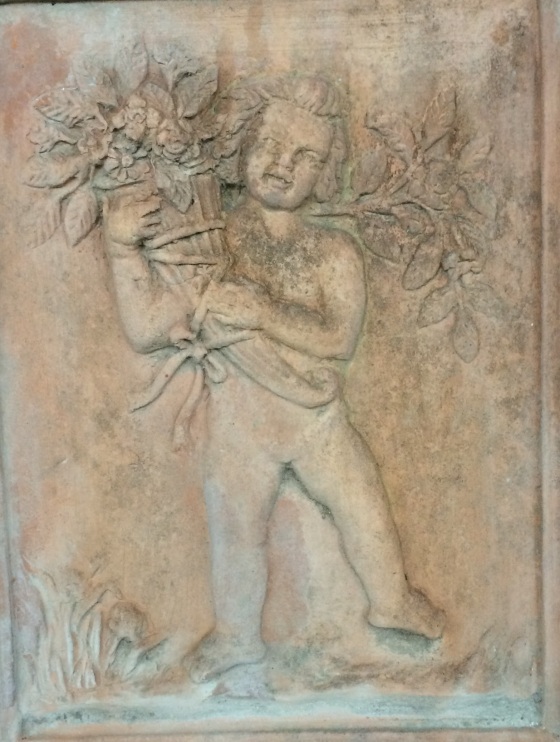 So I had to get something.  Buy something. My wife and I were on the ninth day of a ten-day stay in Italy. She had visited her cousin’s boutique in Pesaro.  And her favorite shoe store and bookstore and her favorite herbalist in Rimini. And a great toy store in Bologna. And her scarf and headband lady in Santarcangelo. She was pretty loaded.

She asked me, “Don’t you need anything?”

That Thursday morning we were walking through the mercato in Borgo Maggiore, a village ten minutes up the mountain from our apartment in San Marino. It was the end of November. In two days I would be back in the classroom.

I had enjoyed a number of luxuries this trip, as I do most trips, most of said luxuries in liquid form and what can be dusted with grated Parmigiano, spun on a fork, and plunged into my mouth. I was very happy. 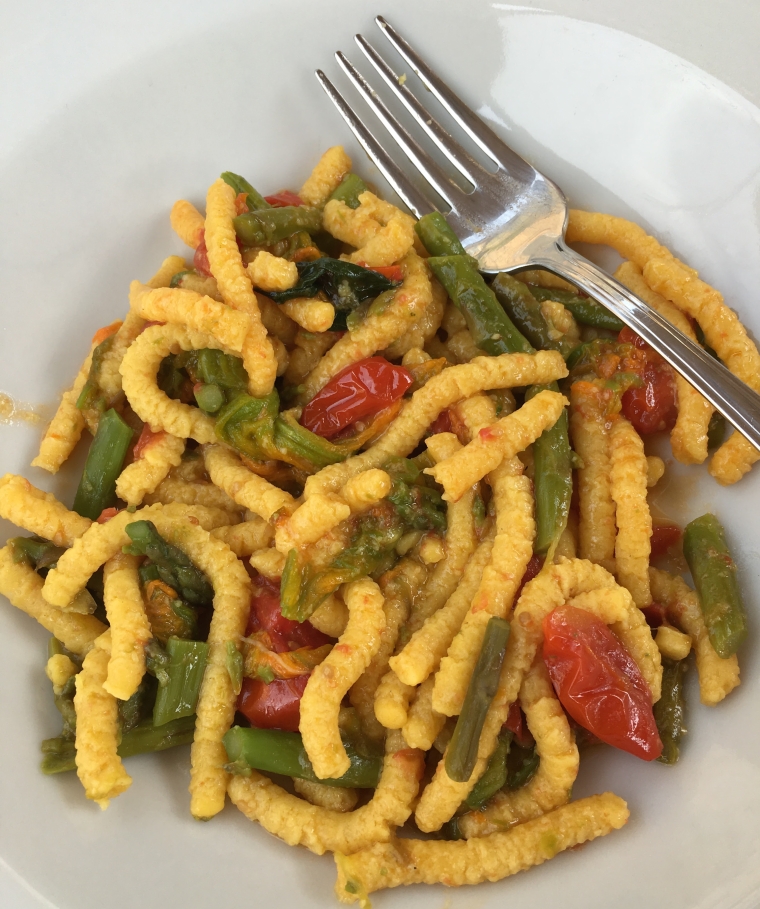 Merchants at the Borgo mercato set up their goods under a long colonnade, at the upper end of which a narrow road gently rises to the main piazza.  Around a curve in that road and up there in the piazza, lots more vendors and lots more stuff. She pointed to a clothing guy at the end of the colonnade, the doors of his van swung open, half a dozen long tables laden with shirts, sweaters, pants; hanging from the support ribs of the awning, coats and jackets, coats and jackets.

This is how we met Giancarlo.

“Can you fix him up with a shirt?” my wife said to him.  Then to me, “How about a shirt? At least a shirt.” Kind of imploring.

Giancarlo looks to be in his sixties, Italian guy thin, gabby and persistent. He has neatly trimmed hair and wears tight jeans and a fitted jacket. He looked me up and down. What’s my sleeve size? collar size? In centimeters I couldn’t say. I told him in inches, emphasizing collar size–I might want to wear a tie with a shirt. I said I’d also like a snug fit. He pulled a dozen shirts out of the van, eyed my torso, said any of these would be just right.

It was too cold to try on a shirt. He was a professional. Under his fitted jacket, he wore a fitted shirt. I took him at his word.

“Good,” my wife said later. We were in the car heading down to Serravalle. “That should look nice.”

A couple days after that, back in Detroit, we opened our bags. I unwrapped the shirt and pulled its pins, unbuttoned it and tried it on. There’s a scene at the end of the movie Big. Dressed in a man’s suit, the Tom Hanks character gets his second wish and, still dressed in a grown man’s suit, turns back into a ten-year-old boy. It’s funny how those clothes hang on that boy; that’s how the Giancarlo shirt looked on me. Not funny. 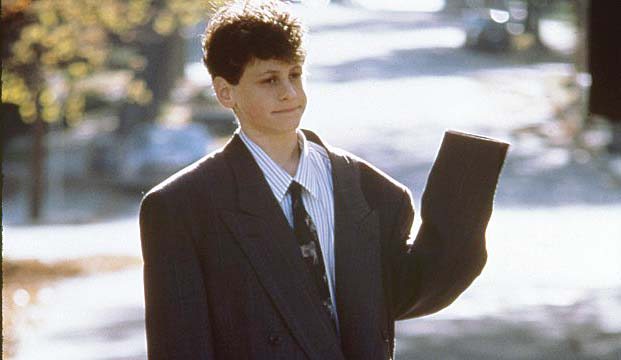 The mercato in Italy, and probably all over Europe, is a thing.  A marvelous thing, in fact. Every large and small town has mercato once or twice a week. Early in the morning, vendors pull into the designated piazza in their vans, open their awnings and unfold their tables, lay out their wares. Linens, clothing, shoes, fruits, vegetables, hardware, pots, pans, assorted kitchen do-dads. What you want, baby they got it.

On a trip to Rome you ought to visit Campo de Fiori (Field of Flowers). If you do, you owe it to yourself to get there before noon. Mercato is a morning event, every day. It’s where home cooks decide what they’re going to eat for lunch and dinner that day. It’s a riot of sights and sounds and smells:  vendors arguing and shouting, their way of carrying on a conversation, in local dialect; hanging in the air is the fragrance of voluptuous flowers, of herbs and fish and meats. 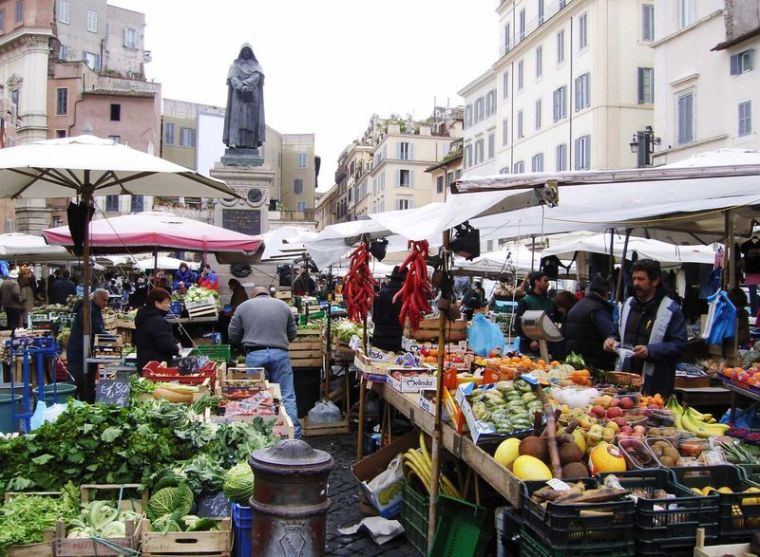 In Florence you might pass through the sprawling San Lorenzo market and mercato centrale. What they’ve got is all of the above, only with way more in the way of leather (shoes, boots, jackets, purses, wallets, key chains, leather journals and calendars, and bags, bags, bags). 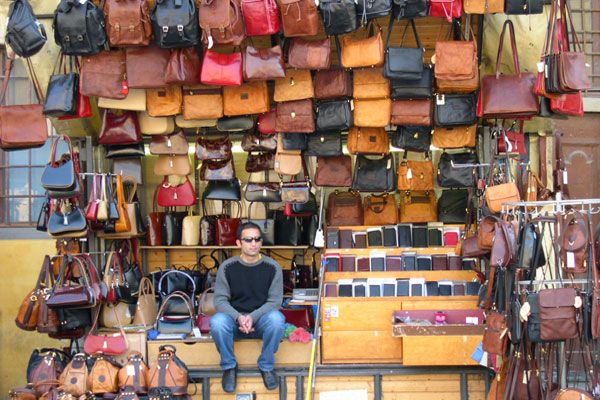 “Never pay the face,” my wife said the first time I went with her to the San Lorenzo market.

It was 1978. We had been married five months. I am from the Midwest. I always paid the face.

“Everyone haggles,” she said.

In her village, Tuesday and Friday are market days.  Tuesdays in the little piazza there’s a clothing vendor and a van with a few kitchen accessories; at the edge of the piazza, down the street closer to our apartment, Marco and Rosana sell fruits and vegetables. Over the years, in my repeated visits, we have become acquaintances, if not friends.  “Good morning,” Marco says in his accented English when he sees me. Then: “Detroit.” Or “How hare you?” He may have a few more words of English. Those matter less than his potatoes, green beans, and assorted greens. I buy enough to make lunch the next two days.

After each purchase, he hands you your change and a little sales slip, then says, “Odori?”

The question threw me at first.  Did I want, what, odors? Smells?

He means a couple celery stalks, an onion and carrot, maybe some parsley. In case you’re making a sauce. He tosses them in your bag, free of charge.

Every Friday, down below the village, in the sports complex parking lot, is another mercato, bigger, fifteen or twenty vans with awnings, tables, and almost everything else one might want or need. Cheese? Fresh fish? Fried squids? Porchetta, the local pork delicacy cut from a whole roasted pig? You stroll, look for vendors you know, chat for a few minutes with locals you see up in town. It’s shopping. But it’s also social. 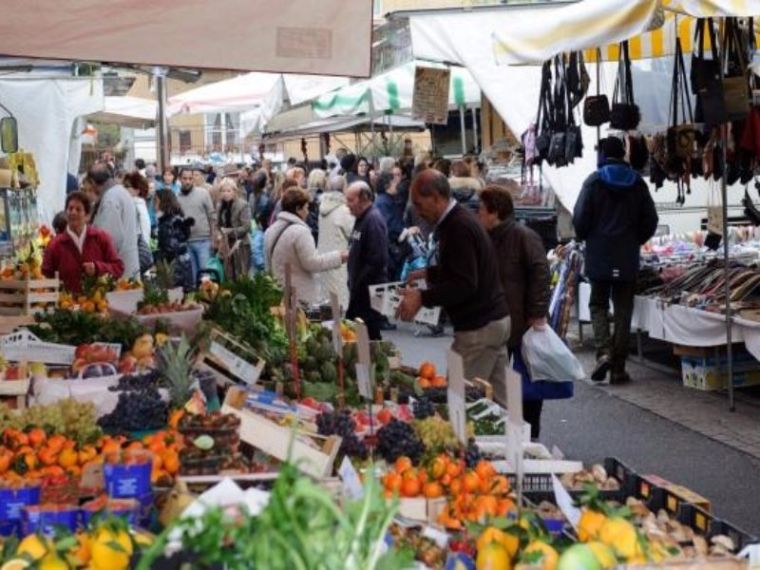 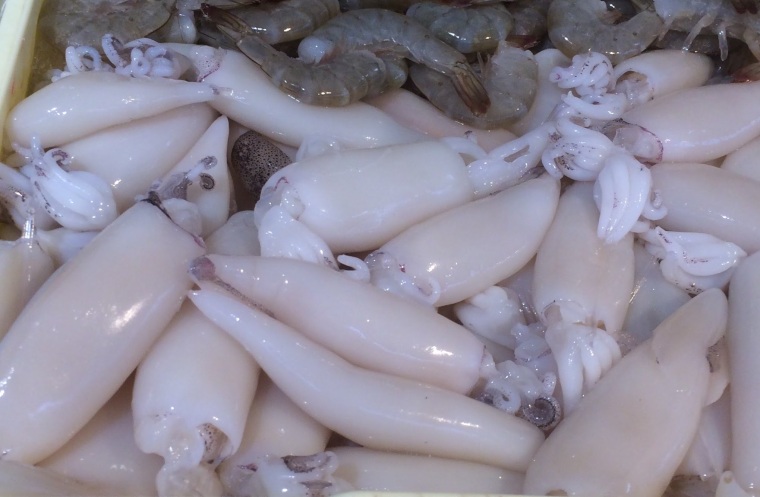 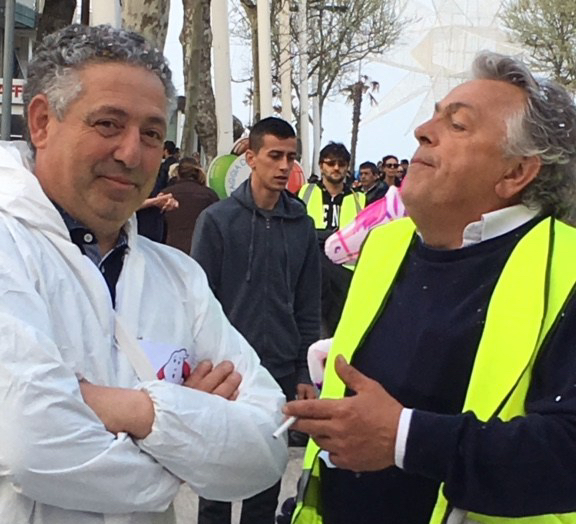 At this mercato on Fridays, and on Thursdays at the mercato up the road in Borgo Maggiore, we seek out our socks-and-underwear lady. If it’s been a while since we were in Italy, we exchange updates: kids, grandkids, how long we’re staying this time. Then, the good stuff: socks and underwear, at a good price. If the total comes to 22 euro, she’ll say let’s make it an even 20.

Back in the US, summer time, winter time, anytime, the shopping is easy. On practically a daily basis a box arrives at my daughter’s door step. Easy. That US institution that once brought us all together, the shopping mall, is in trouble.  According to Time Magazine, “The mall used to have a dance club. Now it’s a dialysis center….By 2022, analysts estimate that 1 out of every 4 malls in the U.S. could be out of business, victims of changing tastes, a widening wealth gap and the embrace of online shopping for everything from socks to swing sets.”

On the other hand, tomatoes, anyone?

In Detroit, the farmers markets give us the same feel as the mercato in Italy.  And here, like there, we have our go-to people. Saturday up at the Oakland market, we buy from Toby the Peachman, Carlos the pear man, Ken the cabbage man, Julie the flower lady; at Royal Oak market, George the eggplant man. If we miss George on Saturday, he’s in Birmingham market on Sunday, along with two vendors we refer to as “the Asian kids,” whose swisschard is newly cut, washed, and ready to cook.  At Eastern Market we’ve been buying from Vince the mushroom man for five years. He never steers us wrong. 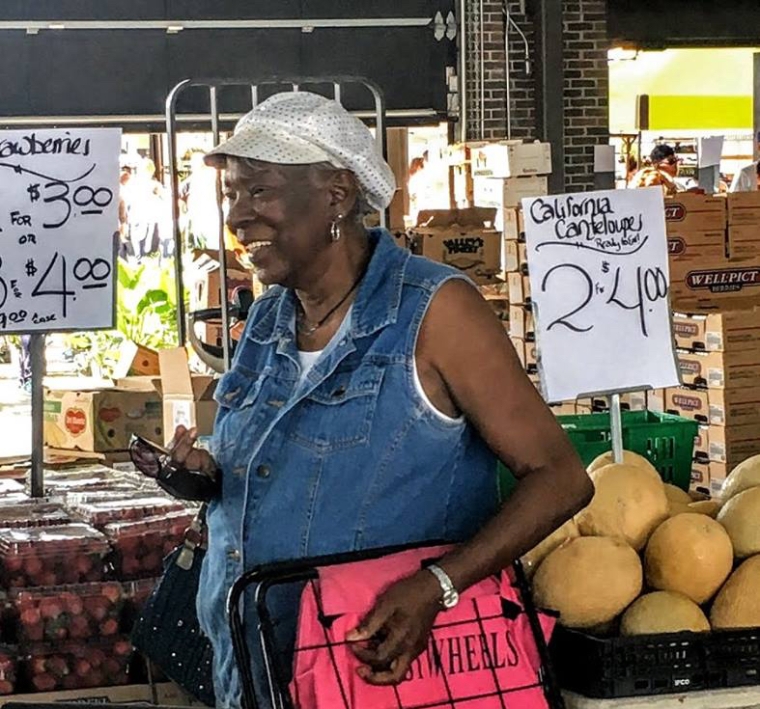 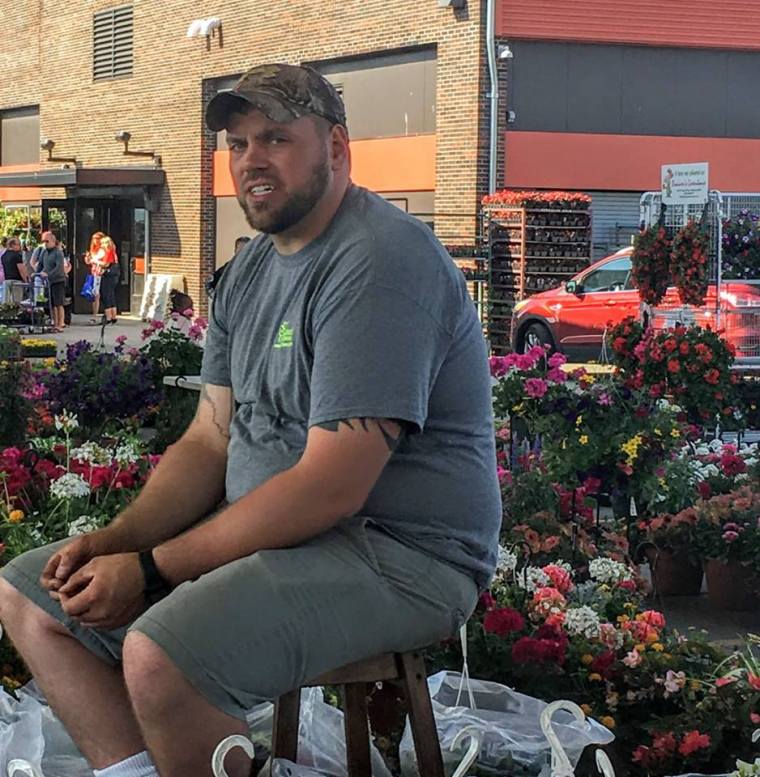 Two years ago at Eastern, we arrived early, around 6:30 a.m.  At the end of one of the sheds, at a stand we typically visited for farm fresh eggs, the couple were tearing open plastic bags of carrots and laying the carrots in little wooden quart-size baskets, baskets that said, These ain’t no Kroger carrots. We’re farm fresh. When in fact it was obviously store-bought produce.

“They do that at this market,” Vince the mushroom man said. “You gotta know who to buy from.”

“We’ve been buying eggs from them,” I said.

He smiled and shook his head. “A lot of the eggs you buy down here come from Costco.”

He sent us to Norm.  Norm the egg man. Norm the potato and shallot man. He has workers hands the size of shovels. He does the work. The real deal.

A year goes by before I get back to Giancarlo. I don’t mention the shirt. It’s November again. And cold. When we go home to Detroit, the real cold will be coming. I need to buy a jacket. He lays 8-10 of them on one of the tables. While I try them on, we talk about where we eat.  My Italian is pretty good: I speak fluent food. We compare notes on restaurants. Of course, he knows all the local towns. Wherever he opens his van, he eats around. He is, as they say in those parts, a bella forchetta, a good fork. The three best places for tagliatelle (which can be dusted with grated Parmigiano, spun on a fork, and plunged into my mouth), he says, are Delinda, Zaghini, and Renzi. The first two I know.  Renzi I’ll look for. Thank you, Giancarlo. 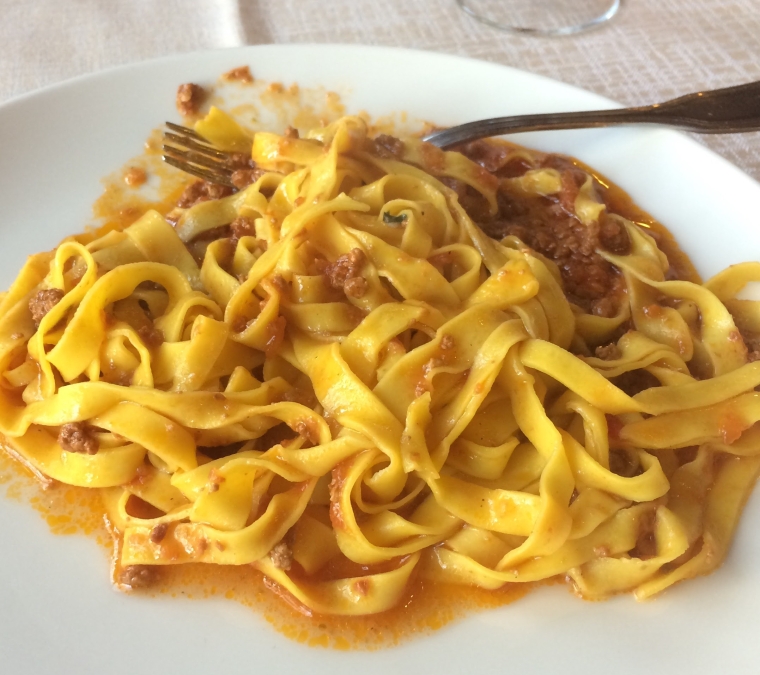 The jacket I like that day, I try not to like it too much, at least not out loud. I tell him it’s okay.  We haggle. I’ve learned. Giancarlo is not easy. He doesn’t expect anyone to pay the face, but he makes you work for it.  Finally he drops his price. An amount roughly equal to what I paid for the ill-fitting shirt. “This jacket,” he says to me, slipping it in a bag, “is a furnace. It will keep you warm.”

A couple Saturdays ago, down at Eastern Market, across the walkway from phony carrots, we met Katrina.

My wife and I had asked Norm our egg and potato man who we should buy our tomatoes from.  Go see Katrina, he said. We asked Vince our mushroom man. He said Katrina. It’s mid-September. The markets are full of tomatoes, big red beauties the size of softballs at virtually every stall.  You probably can’t go wrong. But you can most definitely go more right.

Katrina is five feet three. Wearing jeans and a short sleeve Katrina t-shirt, blonde hair falling to her shoulders, she smiles quickly. Her thin face has seen a lot of sun. She has three young helpers, they could be singers in a boy band, filling paper sacks with fruit: the big red ones, small gold and green guys the size of kiwi, pale pink heritage tomatoes, and more. Where to begin? Which ones do we want?

Katrina, it turns out, is chatty. And passionate about tomatoes. We spend fifteen minutes talking while she picks up one tomato after another, palpates it, describes what we’ll taste (this tomato’s sugar, that one’s acidity and texture, another one she says is ideal for a tomato sandwich).  She steers us right.

We love the tomatoes. Just as much, we love Katrina.

Market, mercato. Don’t even think about calling the whole thing off. 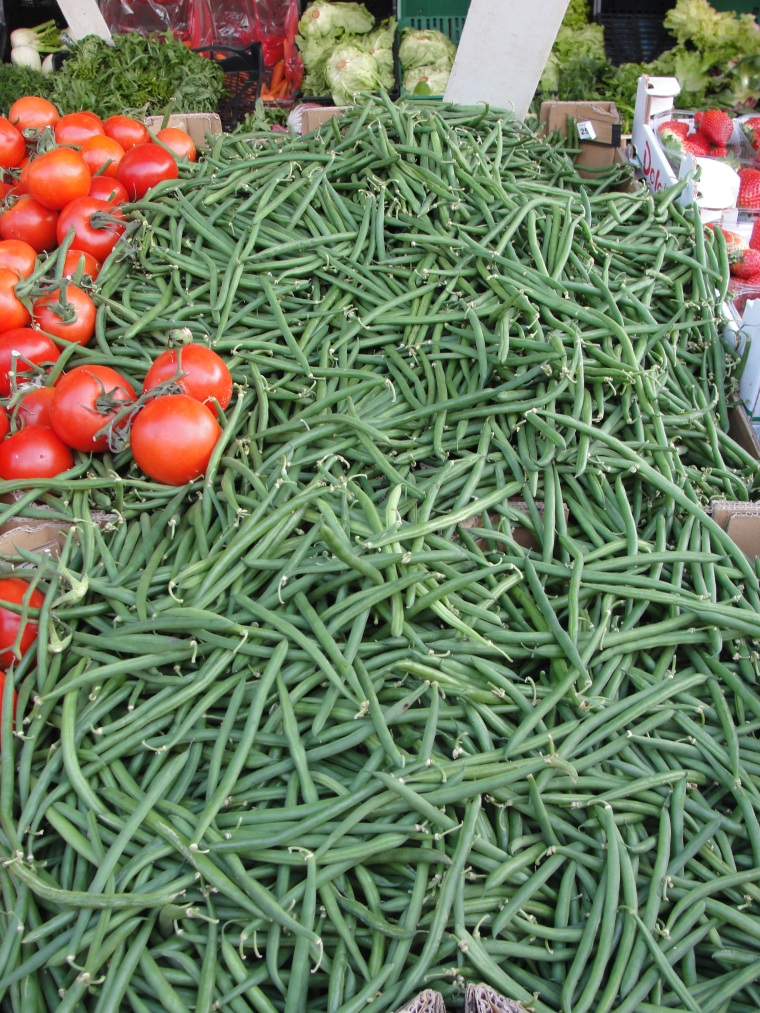