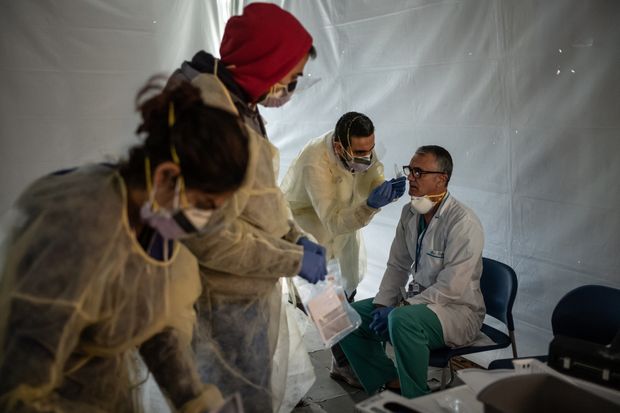 According to the Wall Street Journal, South Korea is capable of testing 20,000 people a day for coronavirus. Way more than the US. How much more? That’s a difficult question–because the number being tested in the US is uncertain. We can say with confidence, however, that the US is testing fewer than 20,000 people a day.

For the scale of this US failure, consider the numbers.

A pandemic is a world war. Nations in the world face a common enemy. Some nations are deploying more powerful weapons on the battlefront than others. How is it that South Korea is so much more effective facing this foe than the US?

One inescapable conclusion is that a country with a fully developed and functioning national health system has superior procedures and weapons to deploy. South Korea has those things; the US does not.

Can we afford NOT to have a fully developed and functioning national health system? It is unlikely that this is the last world war of this kind we will fight.

Citizens vote for leaders that “keep us safe.” The US invests hundreds of billions in systems dedicated to that task. The US takes pride in its military preparedness. It can develop weapons systems, gather intelligence, deploy force by land, sea, air, and cyber. The US military keeps its thumb on the world pulse 24 hours a day. Much of the time, however, war material and personnel are just sitting there, bombs not going off, boots not on the ground. They’re training. They’re ready. We’re safe, the argument goes, because they are ready.

The US has the best healthcare system in the world. It is common to hear that assertion. The system is excellent, for some people. However, we are now seeing its widespread failure, the gaps in the system that may result in the deaths of hundreds of thousands, possibly millions of people. We would not be satisfied with a national defense system that was excellent only for part of the population. National defense protects everyone. The investment in military preparedness is done for senators and CEO’s, for truck drivers and restaurant workers, for children and senior citizens; even for the homeless and for illegal immigrants.

Dubai is testing 13,000 people a day for coronavirus. The US is still scrambling to initiate widespread testing, to produce masks and ventilators. Military hospital ships, it was announced weeks ago, are being deployed; one may arrive in New York harbor by the end of this month.

It might arrive. Maybe by the end of this month.

The metaphor is instructive. How long does it take for an ocean going vessel to change course? They do not speed to their destination. In the US military there are Rapid Deployment Forces. In the US health system, rapid response is out of the question. And people are going to die.

We should demand better.

One thought on “An editorial”