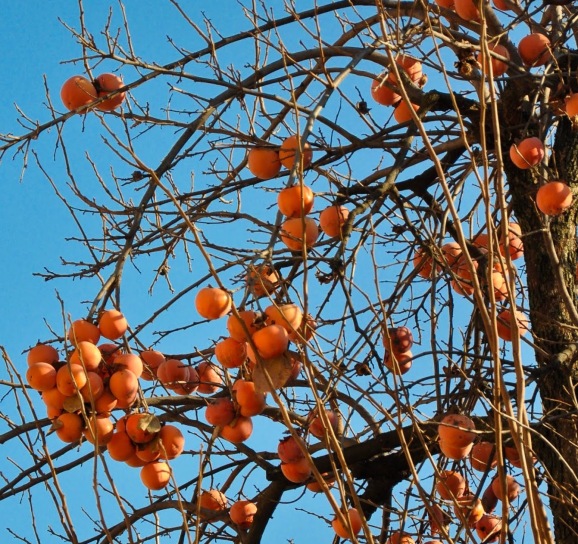 We’re on our way to Ro e Buni for a fat pasta lunch. This restaurant (called a “tenuta,” meaning an estate), is off the main road that passes through Villa Verucchio. A sign says there’s a golf course back here somewhere. I’d look for it but I’m totally distracted by the orchard next to the road. Orange fruit heavy in the branches. Looks like oranges.  But, no, these are persimmons. In Italian called “cachi” (pronounced “CAH-cky”).

Called cachi for a good reason.  The fruit has grown in Italy since the nineteenth century and seems have disseminated from Japan, where persimmons are called “kaki.” Also known as “little suns.”  Also known as “apples of paradise.” Also known as “food of the gods,” from diospryros kaki, its botanical name.

The historical record shows that American explorers and settlers encountered persimmon when they went ashore. They bit into something called diospyros virginiana and found the taste not exactly pleasing.  “If it be not ripe,” John Smith observed, “it will drawe a mans mouth awrie with much torment; but when it is ripe, it is as delicious as an Apricock.”

Sweet and delicious, indeed. A very late fall fruit. We are deep into November. The olive harvest is well under way.  And now to consider: cachi. 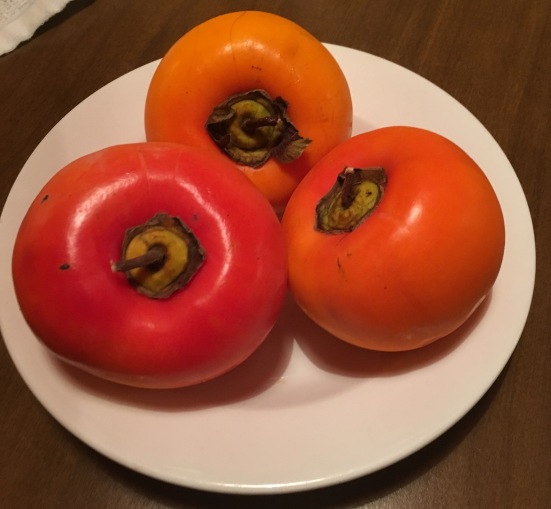 A day after Ro e Buni, my wife’s cousin hands me a half a dozen of them. She points, “Eat these. They’re ready.” Following instructions, I wash one, cut the stem off, quarter the fruit and eat it. It’s juicy, lush, and sweet. Persimmon, where have you been? Or where have I not been?

Next morning I pass a neighbor on the street. He’s returning from the market, carrying a bag of fruit and vegetables.  I point at one the bags and ask if he bought cachi.

“You don’t buy cachi,” he says. “They’re in the trees by the side of the road. Just pick them.”

Well all right. A few weeks I picked olives from trees in the Roman amphitheater in Fiesole. I’ll cook a pan of sausage next week with those olives. And I’m certainly open to stopping along the road to harvest a few cachi. Local pleasures.