Fat rats. Research focused on them suggests there may be something to intermittent fasting. So says Monique Tello in Harvard Medical Publishing.

Good, I think. Because this morning I feel like a fat rat.

My wife and I are in our fifth and final week in Italy.  Around this time in our stay, a kind of desperation sets in. Can we eat enough before we go home? Yesterday at lunch, after our first course–she had the ravioli, I had the pappardelle in boar ragu–we asked our server about the carbonara.

“It’s good,” he said. “You can get it with shaved truffle today.”

We looked at each other. Both us thinking: No. Good God, no, we shouldn’t.

“But,” my wife said. “If we could just have a little taste?”

This is one of the many reasons I love her.

“I don’t see why not,” he said. “When we’re plating some, we can just pull a forkful or two onto a dish for you.”

I pointed to my glass. To go with said forkful, and the stewed rabbit that would be my second course, I would need another round of Sangiovese. This too is a manifestation of quiet desperation. I’ve upgraded from the house wine to the Sangiovese Superiore, a deeper, darker, silkier, more voluptuous pour. 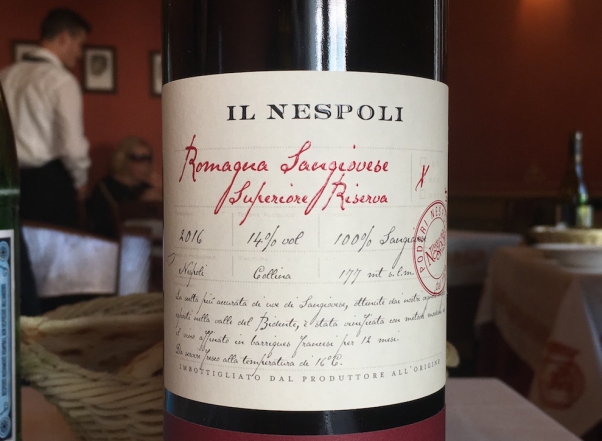 Five minutes later he appeared not with a forkful but with a whole serving of heavenly carbonara, a half order for each of us. Not spaghetti. These were homemade tagliatelle, with white truffle shavings, and lightly grated formaggio di fossa. I’ve always thought of my wife’s carbonara as the unchallenged gold standard. She now has a formidable competitor. 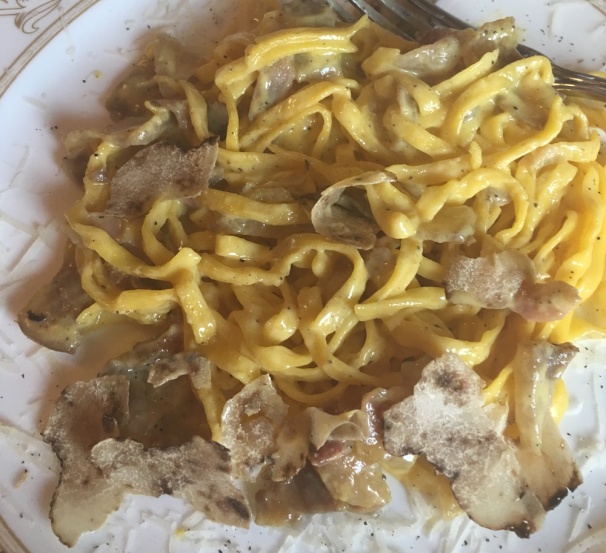 “When you think about it,” she says, “we really didn’t eat much yesterday after lunch, and we ate nothing this morning. It’s like that thing you’ve been telling me about.”

She thinks about it, nods, then says, “On the other hand, we were at the table for three hours yesterday.”

Only one dessert. We split it. 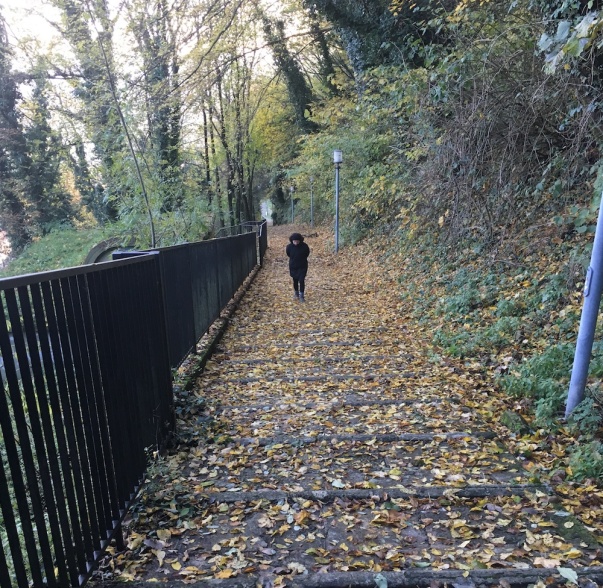 Later this morning, looking for inspiration I stumble upon the Tellos article on IF, as it’s called, and note her thesis.  “Indeed,” she writes, “a growing body of research suggests that the timing of the fast is key.”

Timing. As in Don’t fast when you’re in Italy.

If you’re really serious about fasting there’s the 5:2 approach. The research Tello summarizes describes 5:2 as the more difficult route. Eat what you want for three days.  Then go 24 hours without eating. Two more days to eat what you want, then the 24 hour fast. The problem is, she says, that it’s difficult to get used to not eating. To me, I confess, it sounds like not breathing.

Another approach is based on our circadian rhythms. Assuming you don’t get up at midnight and raid the fridge, your circadian rhythm provides you with a natural fasting period. Diet while you sleep. Not bad. But not good enough. For the fast to be effective you add significantly to the length of the nighttime fast. In an eight-hour time frame, 7:00 a.m. to 3:00 p.m., you eat what you want. For the next sixteen hours, it’s bread and water, minus the bread. Some of that time you’re asleep. The rest of it you practice self denial.

In the study Tello cites, in contrast to the 5:2 cohort, this group “had significantly decreased appetite. They weren’t starving.” 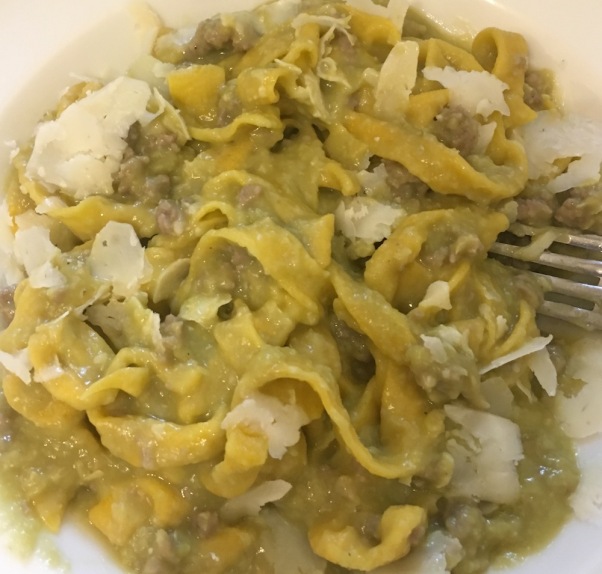 I’m thinking legumes the next time we sit down to eat. We’re counting down, favorite towns, favorite restaurants, favorite foods. It’s our second visit to a place in Rimini, Osteria Io e Simone, and I’ve come with an itch to scratch. A few weeks ago I ordered their cappellacci with squash stuffing, whereas my niece had the tagliatelle in rabbit ragu. Mine was good; hers was great. I’m itching to stick my fork in that pasta with bunny, a tasty low-fat meat. Then, scanning the menu, I see tagliatelle con creme di fava e salsiccia e fossa. The active ingredient: fave, a legume. Okay, there’s sausage, too. So it’s a halfway virtuous choice.

I can make this dish at home, I tell my wife. It’s sort of like a meatless pea sauce I already make. The sausage takes it to new heights.

So we’ll eat our way through the next few days.  Once home, we’ll observe the 5:2 routine. I mean, having been away for five weeks, we’ll try really hard to be good, which will last for about two weeks.

Then we’ll get on the circadian rhythm program, intermittent fasting, intermittent feasting. A bite in the morning, then a big lunch. Then nothing. It’s a fast I’ll try to live with, aiming to be less fat and less rat.